For close to 450 million years now, sharks have been swimming in the oceans. But sharks are not only known for their prolonged existence. They are also known as the perfect predators. They have, over the many years of evolution, developed many astonishing abilities. 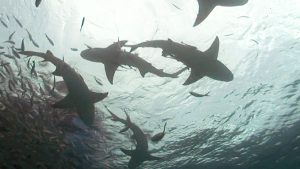 A lot of people assume that dinosaurs dominated the ancient world. This isn’t quite accurate because dinosaurs did not surface until around 230 million years ago. Around the same time that mammals came into being. Although modern humans only date back roughly 60,000 years ago, the first animal that was human-like, also known as a hominid, dates as far back as about 4.5 million years ago. More so, documented civilization has lasted just about 5,000 years. All these indicate that sharks have existed almost 100 times longer than the first human-like animals and about 3 times longer than dinosaurs (or say twice as long as dinosaurs in birds are included).

The oldest fossilized proof of ancient sharks come from shark-like scales that date back to the Ordovician period (about 455 million years ago). Although some paleontologists argue that these scales are not sufficient enough to be called shark-like scales, there is no argument that the scales found dating back to the Silurian Period (about 420 million years ago) are from sharks. The shark scales from this period were found in Mongolia and Siberia. The most far dated shark teeth are from the Devonian Period, around 400 million years ago, and they were found in Europe. Other than these scales and teeth, nothing else has been found to tell us more about those early sharks.

A complete shark fossil found remain dated to around 380 million years old. This includes a fossilized shark braincase found in Australia, most likely a Xenacanth. Remains of this species or similar species have also been found in Saudi Arabia and Antarctica.

There are numerous proofs, throughout history, of disastrous events that considerably changed the environment, resulting in the mass extinction of a large percentage of species. In the most brutal of such events, about 251 million years ago, as much as 95% of species on earth were wiped out, possibly due to either volcanic activity or a comet impact. Over the past 439 million years, five major mass extinction events have taken place.

For species that survived, this destruction presented an opportunity to thrive and prosper if previous predators were killed or new, uninhabited territories opened up. These, therefore, have often given rise to ‘adaptive radiations’ or a significant rise in new diverse species. Sharks, due to their adaptable design, have survived all of these five mass extinctions. They have also gained from some adaptive radiations resulting in the appearance of many new interesting sharks.